A couple of decades ago, the only bulbs that were present to light homes were incandescent bulbs and the only choice you had to make was wattage, where you would pick a bulb based on the level of brightness needed.

In recent years, however, new bulbs have emerged due to advancements in technology hence replacing the old incandescent bulbs.

The new bulbs are CFLs and LEDs which are more energy-efficient and durable, meaning that they can last for many years. LED light bulbs were very expensive when they were discovered but their prices have declined significantly over the years.

In this article, the three types of bulbs: LEDs, CFLs, and incandescent will be explored in terms of their pros and cons hence answering the question, which one is better?

Everything You Need to Know about LEDs 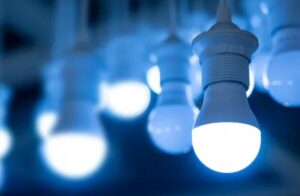 LEDs that stand for Light-emitting Diodes were commonly found on clocks and other small electronic displays for some years before household LED bulbs came into existence a few years ago.

Initially, LEDs could only be used in indicator lights and lab equipment because they were able to emit red light only, but today they can produce ultraviolet and infrared spectrums that are visible.

The light released by these bulbs is reliable, spontaneous, and can be dimmed.

However as stated earlier, their prices have dropped significantly over the years. LED bulbs once came as long tubes only but currently, they are available in all shapes and sizes and some also come with decorating ropes.

A LED bulb of 16.5 watts has an energy usage equivalent to that of a 75-watt incandescent bulb and 20-watt CFL. It is predicted that if LEDs are adopted fully, it will lead to energy savings worth about $265 billion and a decline in demand for lighting electricity by 33% in 2027.

Where Are LEDs Commonly Used?

LEDs were first used in computer circuit boards. Currently, they are used in many other areas such as traffic lights, indoor and outdoor lighting as well as in lighted signs. 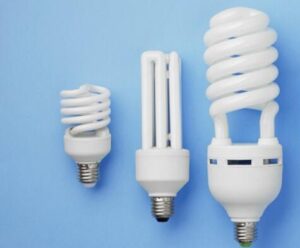 CFLs which stand for Compact fluorescent lights are tubes or bulbs that are filled with gases such as argon and mercury vapor and are lit when an electric current flows through the tube.

The reaction that takes place produces an invisible UV light and heat that is quickly changed to visible light through the help of the fluorescent coating inside the tube.

This process takes a while and that is why a CFL bulb takes about 30 seconds to light up completely.

The standard fluorescent lights come in form of tubes and they were made to replace the incandescent bulbs since they are more long-lasting and efficient.

Where Are CFLs Commonly Used?

CFLs are commonly used in a wide range of areas such as warehouses, commercial buildings, and schools. They are also a perfect replacement for incandescent bulbs. 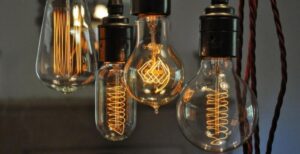 An incandescent light bulb is a device that heats a filament or a wire using electricity until it glows white.

This filament cannot be heated in the presence of oxygen because it would burn up completely before it gets that hot to glow. The inert gases or the vacuum inside the incandescent bulbs make it possible for this filament to heat up to the level of glow.

The incandescent bulb burns out in the long run because the filament evaporates gradually with time. The molecules of the evaporated filament are deposited on the glass shell and hence a bulb that burns out will look yellow.

The incandescent bulb was originally discovered by Henry Woodward and Mathew Evans who later sold the patent to Thomas Edison. Thomas Edison then switched the bulb to a carbon filament.

Where are Incandescent bulbs Commonly Used?

They are generally used to light commercial buildings and households. They can also be used for decoration and advertisement purposes.

Which Is Better: LED vs CFL vs Incandescent? 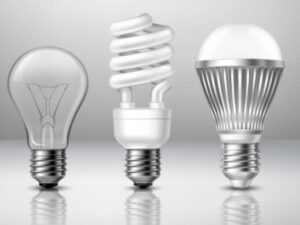 To know your better lighting bulb, the following aspects need to be compared before making the final verdict:

The decision to buy the right bulb will be effective based on whether you know the differences between the three types of bulbs in terms of their brightness. These bulbs vary significantly in terms of their light output.

The bulbs’ brightness is effectively measured by comparing this brightness with the amount of power it consumes.

Using the same amount of power, LEDs are the brightest when compared to CFLs and incandescent.

The measurement for brightness is in lumens and is always compared with the wattage consumed to quantify it.

While both LED and CFL produces the same brightness, the amount of energy consumed to emit equal lumens differs significantly.

An incandescent bulb will emit 15 lumens of brightness using one watt of power while a CFL and LED will emit 60 lumens and 72 lumens respectively using the same amount of power.

This indicates that for just approximately 10 watts of power, a LED bulb will produce the same brightness as an incandescent bulb of 60 watts.

The lifespan of LED, CFL, and incandescent bulbs vary significantly. The advancement in technology has dramatically increased the lifespan of some light sources especially LED to very high levels.

Some LED bulbs last forever. Having a LED bulb with a lifespan of more than 25,000 hours means that if such a bulb stays on for 2 hours daily, 34 years will elapse before you can replace it.

Incandescent bulbs and CFLs have an average lifespan of 1,000 and 10,000 hours respectively.

If lifespan is the factor to consider when buying a light bulb, then LED bulbs are a perfect choice.

Additionally, most of the energy released by CFLs and incandescent are in form of heat while LEDs produce no heat. In terms of cost, the upfront prices for the LEDs are much higher compared to the other two, but you will save a lot in the long run because they are rarely replaced as compared to the CFLs and the incandescent. LEDs also use the least power wattage among the three.

1. Are CFLs or LEDs More Cost-Effective?

If you are looking for a long-term bulb or for large commercial/industrial spaces, LEDs absolutely wins.

When you want to replace your light bulb, the cost will certainly be the biggest factor in your decision making. But the cost is more than just the price. You should consider other options such as the length of operation.

A bit of money spent today might lead to substantial saving over the years. The buying price of LED bulbs is slightly more than that of CFL bulbs, but a 6 pack of LED bulbs will last you about 8 times longer than a 6 pack of CFL bulbs thus saving you money in the long run.

LED bulbs have an incredible lifespan.

They can last you up to 50,000 hours. In simpler terms, a string of LED lights in a particular holiday will still be functional for the next 40 holiday seasons.

CFL bulbs have a lifespan of about 10,000 hours thus cannot compare with the lifespan of LED lights. LED bulbs can fall on your floor and will not break, but CFL bulbs are fragile.

3. How Much Heat Do CFL and LED Bulbs Give off?

Moreover, CFL bulbs release about 80% of their energy to the surrounding as heat while your LED bulbs emit little or no energy thus extending their efficiency.

4. What Is the Difference between Fluorescent and LED Lights?

5. Why Would LEDs Put Fluorescent Lights out of Business?

The efficiency of LEDs is improving at a very high rate over the years and has beaten that of fluorescent bulbs in the recent past. This means that LEDs will remove the fluorescent lights out of business shortly.

Fluorescent lights are less efficient than LEDs because of several factors. First of all, fluorescent lights depend on a ballast to function but this ballast gets damaged at times leading the bulb to make some irritating noise.

6. Why Would LEDs Put CFLs out of Business?

The efficiency of CFLs is good but that of LEDs is even exceptional.

This means that as far as CFLs will last, LEDs will last much longer hence a time will come when CFLs will no longer be in business when their efficiency is entirely masked by that of LEDs.

The fact that CFLs depend on mercury which causes a waste disposal challenge is enough reason to replace them with the high efficient LEDs.

Furthermore, CFLs make some annoying noise when they are operating on damaged ballasts.

CFLs also emit non-directional light which leads to wastage. For instance, when CFLs illuminate the undesired areas such as the ceiling, much light energy is wasted. The fact that CFLs have these loopholes is an obvious indicator that they will not stay long in the market.

7. Should I Replace CFL with LED?

Replacing CFL with LED is essential even though the energy savings you are going to get is not as much as when replacing the incandescent bulbs with LEDs.

However, even as much as saving energy is the primary goal of replacing the types of bulbs you use, the other CFL inefficiencies discussed before are convincing enough for you to replace them.

Such inefficiencies are the warming-up period that you have to wait before the CFL bulb lights up completely.

In conclusion, It is very essential to embrace the change that advances in technology have caused. This is not only because we want to save some energy, but also because in a few years from now we shall not be able to buy some types of bulbs we use in our homes.

The incandescent bulbs in 10 years from now will probably be gone entirely, and only a few CFLs will be in the market. However, there is no need to worry because their replacement; the LED bulbs are much more durable and efficient.