When the sun sets that’s when birds go to sleep. Some of the best moments are made after the nightfall, of course with the help of artificial light. The electric light bulb, especially the incandescent one has become something we can’t live without. You must be wondering who invented the light bulb.

Just like other inventions, the final product, such as the LED lights that are one of the greatest inventions of the 21st century, is the cumulative contribution of several inventors over some time.

Who Invented the Light Bulb? 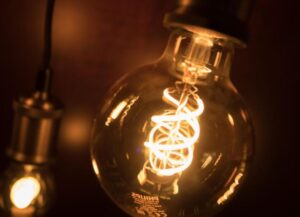 About 80 years before Edison patented the first successful light bulb in 1879, an Italian inventor known as Alessandro Volta developed the voltaic pile, a practical method of generating electricity.

According to Live Science, the voltaic pile was built with alternating discs of copper and zinc and cardboards soaked in saltwater. When the copper wire was connected from end to end, the pile would conduct electricity. While the modern battery is inspired by Volta’s invention, the glowing copper by Volta is one of the earliest demos of incandescent light.

There are more inventors 200 years ago that dedicated their time to creating lighting solutions for home and family. One of them was an English chemist, Humphrey Davy.

According to Science Focus, Humphrey showcased that electric current flowed through wires and their resistance resulted to heat which would then turn to light. He, however, stated that the only challenge with incandescent light was finding a cheap material burning brightly for more hours.

Warren’s design had a high platinum melting point and therefore would have little gas molecules plus advance on longevity. Although it was an excellent design, platinum was expensive and impractical for commercial production.

Why Thomas Edison is Credited? 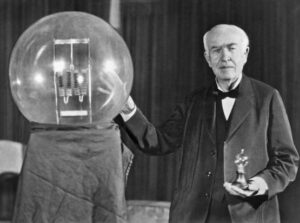 While tens of light bulb inventions didn’t go unnoticed, it’s Thomas Edison’s and Joseph Swan’s bulbs that made it to the commercial level.

According to Bulbs.com, Swan used treated cotton thread to build a longer-lasting light bulb and also solved the problem of bulb blackening. According to Interesting Engineering, Joseph Swan patented his own design in 1879, which rubbed Tomas Edison the wrong way.

Mathew Evans and Henry Woodward who were Canadian inventors also tried to build their own light bulbs in the year 1874. Their bulbs came in different sizes and shapes, and used carbon roads stuck between electrodes in nitrogen-filled gas cylinders.

Evans and Woodward attempted to market their great invention but the odds were against them. Finally, they sold the patent to Thomas Edison in 1879, according to Interesting Engineering.

Edison takes credit because he didn’t stop improving the bulb. According to Energy.gov, Edison’s developed many light bulb inventions that made the bulbs more practical.

He focused on generating electricity and established the first power utility station the Pearl Street Station in Manhattan. Edison even developed the first electric meter.

After beating his competitors to a more practical and inexpensive light bulb, Thomas Edison and his team tested more than 3,000 designs between 1879 and 1880.

According to Live Science, Edison discovered that a filament of carbonized bamboo would burn for over 1,200 hours. The filament was used until in the late 1880s. Willis R. Whitney discovered a treatment that would help filaments burn bright without darkening.

Edison’s company, Edison Electric Light Company began marketing its product, but all was not well. Edison and Swan’s inventions were so identical, that Swan sued Edison on copyright infringement grounds. The British courts ruled in Swan’s favor and ordered Edison to make Swan a partner in his power company.

In 1883, the U.S. Patent Office realized that even Edison’s patent was invalid and was a duplicate of another American’s invention. It must have been a hard time being Thomas Edison.

Despite that, Edison will forever remain in the history books as the inventor of the light bulb. According to Interesting Engineering, Thomas was one of the most prolific inventors and businessmen of the late 19th and early 20th century. Before his final bow, he had 2,332 patents under his belt, 389 of them being electric lighting and power. 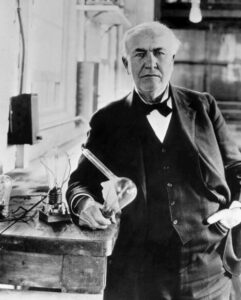 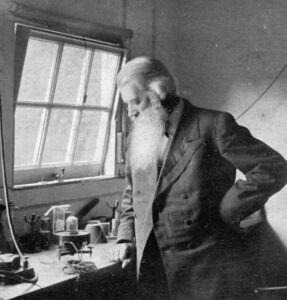 What Was Nikola Tesla’s Contribution?

All eyes were on Thomas Edison. The incandescent light bulb was revolutionary. The pain in the head was supplying every American home with the power, and according to Light Bulbs, that’s where Nikola Tesla came in.

Born in the Austrian Empire, modern-day Croatia, Tesla followed the footsteps of his mother, rather than his father. His mother used to make small household appliances during her spare time and inspired Tesla to love electricity.

Even though his father wanted Tesla to be an orthodox priest like him, Tesla studied engineering and physics. He came up with the induction motor idea, but no one paid attention. He then decided to migrate to America where electricity was taking shape.

Tesla worked with Edison for a short while before going separate ways. According to lightbulbs, Tesla and Edison may have disagreed on electrical currents. 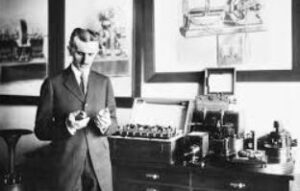 Tesla survived on manual labor before he got a chance to meet big names such as J.P. Morgan and other investors who backed him to establish his own company, Tesla Electric Company.

Even though he invented the Tesla coil, induction motors, and wireless technology among other inventions being used today, his fame didn’t last.

Tesla was a genius, but not a businessman like Edison. Edison’s inventions made him famous and earned him more money, but for Tesla, he was all about making people’s lives better.

He didn’t protect his inventions and he died broke and nearly forgotten. Some said it was Edison’s fault. Tesla deserves recognition for his contributions just like any other inventor.

Without him, Edison, Swan, and other inventors, the world would still be in the dark, probably.

The Invention of Tungsten Filaments

Although light bulbs were impressive, improvement ideas were welcomed. William David Coolidge who worked at General Electric improved how tungsten filaments were manufactured in 1910.

Tungsten has the highest melting point for all chemical elements, and Edison identified it as an excellent option for light bulb filaments.

However, the machine required to produce the tungsten wire was unavailable in the late 19th century. Most of the incandescent bulbs today use tungsten filaments.

The Invention of LED Lights

Light-emitting diodes (LEDs) are the future of lighting. The reasons why LED lights are taking the center stage is because:

The invention of the LED was purely accidental. While trying to create a laser in the early ‘60s, Nick Holonyak made an outstanding discovery and patented it for use as a light fixture.

In the following years, yellow and green LEDs were introduced and used in calculator displays, indicator lights, and traffic lights. In the early ‘90s, Hiroshi Amano, Isamu Akasaki, and Shuji Nakamura created the blue LED and went ahead to win the 2014 Nobel Prize.

The blue LED opened way to white LED light bulbs which were created through the coating of the diodes with phosphor. Today, LED technology is used for industrial, commercial, and residential applications. LEDs capabilities have increased and are known for their:

LED technology has influenced the introduction of government programs as well as standards to conserve energy, and development of industry best practices, and warranties.

The World of Lighting Today

Today, there are a variety of lighting choices you can choose from. There’re different options for light bulbs. Apart from LED lights, there are also compact fluorescent bulbs (CFL) that produce light by heating a gas.

Phillips has created wireless light bulbs that can be turned on and off via a smartphone app. The Phillips Hue used the LED technology and can also be programmed to sync with movies, music, and video games.

What Are the Latest Inventions about the Bulb? 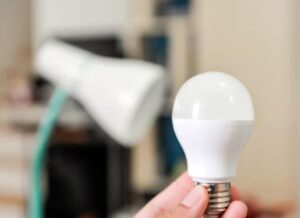 LEDs are known for their low energy consumption, but have you ever thought about no-energy lighting? Is that even possible? Yes, and it’s already here with us.

Malcolm Wright came up with a way to light up an LED bulb without any power at all, about five years ago. The LED light works by inserting a circuit in series with an appliance such as your TV, pump, or vacuum cleaner.

Wright was not a wizard, but a curious inventor who found out that LEDs can light up for free if they piggybank on power used by other devices. It’s not that the light doesn’t use any power. It only takes advantage of another circuit to work.

As long as you use the bulb with your electricity, your wattmeter will not move an inch. That means you’ll not pay for anything unless you use other appliances.

LED’s may be considered eco-friendly because they consume little energy, but come to think of the manufacturing, distributions and disposal of these lights, their environmental footprint is not the best.

An English team fat Nottingham Trent University, in conjunction with Spanish company ONA and with the backing of the European Commission developed what the called ‘eco-light.’ Theirs has a lower environmental footprint from the manufacturing to the disposal stage.

According to the researchers, eco lights have a 75 percent lower environmental footprint than LED bulbs in the market. The aluminum heatsink is recycled, wires are cased in silicone rather than PVC, and it also has a recycled PET casing.

The university’s professor said that the design should inspire manufacturers to develop products that are less impactful to the environment.

Ever heard of a lamp with a back-up battery? Seems simple, right? The battery ensures the lights stay on in a power cut. It can last for hours and even power other devices and help charge your phone.

What’s more, you can help your energy company reduce the load at peak times and earn money back.

How the Invention of the Light Bulb Changed Lives?

The world has seen great inventions, and none of them, including the light bulb, can be credited to a single inventor. Small improvements and implementing the ideas of other inventors are the reasons we have light bulbs we have in our homes today.

We recognize the efforts of every inventor in making the world a better place. Do you think Thomas Edison should take most credit?

LED Color Temperature and Kelvin Light Scale
How to Choose the Right Bulb Shapes and Sizes?
LED vs CFL vs Incandescent