LED lights flicker for a variety of reasons. It can be caused by cable connection or faulty bulbs, and the most common is due to power quality.

We will explain why LED lights flicker, how to diagnose it, and what you can do about it. Let’s get started! 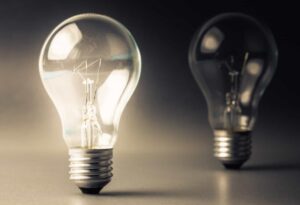 LED lights can’t damage your eyes unless the fluctuating frequency is set to a specific wavelength that could be damaging.

The flickering of an LED light produces reduced levels of blue and violet spectrum wavelengths, but this does not harm eyesight because they aren’t emitted in significant quantity by standard LEDs.

Another possible concern with LED flicker might be motion sickness or migraines, where the brain can get confused concerning the perceived movement of blinking lights.

The most reported side effect from LED lights is headaches, and that’s most likely because the human brain has a hard time adapting to flickering objects with fast-changing light intensity.

The studies found that people who experienced migraines had an increased sensitivity to flickering light than those who did not have a history of migraines.

Besides just being annoying or distracting, this could be dangerous for those with sensitivities to flickering light.

The flicker rate of most LED light bulbs is within the range that does not put any significant strain on people’s health.

Another common misconception is that flickering LED lighting can be harmful to your eyes and lead to blindness. In reality, the light from a modern-day flicker-less LED emits very little radiation.

There are two types of flickering that can happen with LED lights, and they are both caused by power surges.

It’s important to note that intermittent flickering is more likely than dimming and can be caused by various problems, such as too many LED lights in one room or running at the same time.

Flickering is a common problem that any number of factors can cause. To help you diagnose and fix this issue, we’ve put together a list of some potential causes to get you started.

1. Error in the dimmer

LED lights flicker when they are dimmed because of an error in the dimming circuitry. Dimmers have a small circuit board designed to handle this, but LED bulbs can’t handle it and will flicker at low levels.

The LED is difficult to dim because it responds differently than most standard light bulbs.

When the dimmer is set to a low level and an error in the dimming, it will cause a flicker because of the difference in power between levels. The dimmer tries to lower the power going to the LED by reducing its voltage.

LED bulbs use a constant current circuit design, amplifying light with each low voltage phase and making it difficult for dimming circuitry in most standard switches to regulate the bulb’s brightness successfully.

The bottom line is that if you’re experiencing flickering on your lights, then there’s something wrong with your switch or dimmer.

The connectors on the bulb to the power source can become loose over time, which causes flickering in the lighting and creates an unsafe environment.

The bulb may be loose in the socket, or a wire inside the light is broken.

Bulb connections are often tight enough when they’re first installed for immediate use but over time may become loosened due to dirt or dust.

Sometimes when dust, dirt, or corrosion is in the circuit of your LED light, it can cause them to flicker.

This flickering happens because they are blocking power and causing a mismatch that disrupts electricity flow.

The LED lights may be flickering because the driver settings are incorrect.

This can happen if you adjust them incorrectly or don’t have a strong enough power source for your LEDs, which affects how much light they produce, and this could lead to some malfunctions in their operation.

Incorrect driver settings can be caused by setting the voltage too low or running more than one set of LEDs off a single driver.

LEDs can also be affected by voltage fluctuations or power surges which cause your LED light bulbs to flicker or turn off completely.

Voltage fluctuations typically happen due to bad wiring in homes while power surges; both types of electrical disturbances will cause your LED lights to blink on and off rapidly.

When this happens, the flickering is usually intermittent and may last for just a few seconds.

How To Stop and Prevent LED Lights Flickering in the Future?

There are many reasons why LED lights may flicker. However, it is essential to note that some proactive steps can be taken to prevent this from happening again.

We will share a few tips on stopping and preventing LED lights from flickering in the future.

If you notice that your LED lights are flickering, it could be due to loose connections.

You’ll want to make sure all of the wires and plugs have been checked for any tears or wear in order to ensure a consistent display with no flicker.

2. Replace the dimmer switches that have been designed to work with a LED bulb

If you are currently using a dimmer switch and it is designed not for an LED bulb, then the chances are that the time has come for you to replace your switches.

The reason behind this is because there have been some advancements in how these new bulbs work, and they need different kinds of switches.

The power supply is one of the most important components in your home. It regulates and balances current, voltage, power factor, frequency flow to ensure that all other appliances are operating at their full capacity.

Flickering LED light bulbs usually indicate that something is wrong with their power source. If they keep on going out or blinking even after switching them off, then chances are high-voltage fluctuations may be at fault.

1. Why Do LEDs Flicker Even When Lights Are Off?

LEDs flicker for two reasons: to regulate brightness and as an indicator of power usage.

An electrical problem can cause dim flickering in your LED lighting or if there’s a loose connection on the circuit board.

Lights flicker because electricity doesn’t flow as smoothly through them. They usually have inductive loads that cause this reaction to happen more easily than other bulbs like fluorescent tubes, incandescent lamps, etc.

This occurs due to current surges coming from nearby power lines, which distort voltage across time, resulting in higher frequency fluctuations at high-voltages within circuits with a capacitive load such as LEDs.

A low voltage LED light will flicker for two reasons.

In this case, you need some sort of stabilizer or booster to provide a steady power source so that the reduced voltage doesn’t cause your lights to flicker as it switches from higher-voltage and lower-voltage inputs.

LEDs are made up of a series of diodes that produce light when current flows through them.

The intensity of the voltage determines how much or little electricity flows through each diode, which affects its brightness.

If there is an imbalance in the power supply, it will cause some of the diodes to be brighter than others and create flickering.

3. Do LED Lights Flicker When Burning out?

The answer is yes, but not all of them do.

LED lights flicker when they burn out because the burnt-out element causes an intermittent current, which in turn causes a flickering effect.

The technical explanation is that the voltage to drive an LED light is pulsed by using alternating polarity power supply sources.

The LED starts to dim long before it burns out due to high-temperature build-up in the chip, and at any moment, it could go into thermal runaway and be destroyed.

So you may see flickering from time to time during regular use, which should not be confused with burnout of the LEDs themselves.

These flickering letters are most likely caused by a general decrease in power efficiency as each element slowly dies over time whether or not they’re being used.

4. Will Taking The Bulb Out From Fixture And Resetting The Fuse Box Fix Flickering?

Many variables could cause flickering, so it might not be the correct fix. In most cases, all this is necessary to fix the flicker is to clean the fixture and bulbs.

A flickering lightbulb could mean that it’s loose or damaged elsewhere inside of the lamp’s socket.

If you want to take a potential DIY project, repositioning the lightbulb in a fixture might be an easy way to diagnose the issue.

The condition for a flickering light is often that the circuit is overloaded. Removing one of the dimmer bulbs will usually fix this issue as it balances the load on the circuit.

The bulb may not be grounded or adequately screwed in and needs to be inspected before it could cause other problems with nearby lighting items.

This can also happen if you’ve been replacing your bulbs with higher wattage, which will increase demand on your circuit, so some lower-wattage replacements would have to be made for this to work permanently.

Power fluctuations in the house typically cause the LED flickering on dimmer switches. When the electric current changes, the LED will give off a different frequency of light, and this can cause a variation in light production.

LEDs and dimmers switches are different technologies. LEDs do not need to have a specific voltage, while dimmer switches determine the voltage for an LED by sensing the intensity of the current passing through it.

This voltage fluctuates over time, so this can cause connection problems with a switch.

Most LEDs are sensitive to power quality and are designed for constant voltage operation.

But some dimmers introduce cycles of voltage below the threshold at which an LED will turn off and above the level at which it turns on, leading to flickering if not corrected.

There are two main reasons for flickering 12v LED lights.

Flickering LED lights can be annoying and frustrating. But there are ways to fix the problem.

Fixing the problem isn’t easy because there are many possible causes for this issue. The easiest way to find out what’s causing the problem is to call professional electricians, But this guide will help you narrow down the potential issues so you can fix them quickly.