No one likes bugs, especially when they are in your home. You might not know it, but bugs are attracted to light. Insects like moths and fireflies will be drawn towards them.

This is because they use a form of bioluminescence that relies on photons to create light and attract mates.

LED lights also produce photons which can sometimes lead people to believe that bugs are drawn to them as well. But do they? Let’s find out! 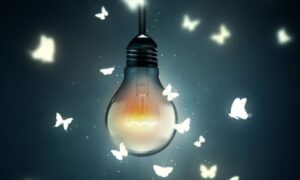 Why Do LED Lights Attract Bugs?

The best hypothesis is that bugs see LEDs as a sort of natural light, and they’re drawn to it.

In general, bugs are attracted to things that emit light. This kind of attraction is called phototaxis.

For insects, this phototaxis may help them find food or mates; for other organisms, it may be competition between species for resources such as food or space.

The type of organism will determine the intensity and wavelength they are attracted to some light source.

Certain types of insects are attracted to light more because of their evolution. Most of the beetles, flies and some other true bugs have a variety of photoreceptor called “cryptochrome” that detects specific blue wavelengths.

Cryptochromes in the eyes of these insects can receive messages faster than vertebrate photoreceptors, making them more attractive to light sources.

White, blue, and green light are the colors most attractive to insects.

Most bugs are attracted to light, and so they are usually found around lamps in your house.

Insects see colors differently than we do, which is why you may not be able to see them without a blacklight.

There is a lot of research on this topic, and the answer isn’t clear-cut.

However, it’s generally accepted that light in the blue wavelength range between 450-495 nanometers seems to attract more bugs than other colors. This has been shown by experiments where different colored lights are used as bait for moths.

LED lights attract bugs because the light spectrum resembles sunlight, so they mistakenly believe it might be dawn. And since insects fly near dawn or dusk, they are often attracted to lights.

How to Keep Bugs Away From LED Lights?

Keeping bugs off your outdoor lights is not an easy task. So, how do you go about it? There are a few ways to keep the pesky insects away from your lights.

It has also been shown that the color of light makes a difference.

Green is a universal deterer except for honeybees which seem to be drawn to anything with UV.

Red LED lights are often recommended for use in bug-free situations.

This is because the spectrum of a red LED light includes wavelengths that shorter than those of many insects’ sensitivities, making it more difficult for them to see the light and fly towards it in search of its heat source.

Red LED lights are also subject to diminishing returns, which means over time, the number of bugs that will fly towards the light will diminish even with constant use and replacing of bulbs.

The Best Lights to Repel Bugs

There are many different types of bug repellents out there, but the best lights to repel bugs are those that produce ultraviolet light.

These UV lights will keep insects at bay and eliminate any bacteria and viruses that may be lurking on surfaces.

The most effective type of these light is a black light which emits a wavelength of between 350-380 nanometers (nm). This range is ideal for killing both mosquitoes and other biting flies.

UV light has a wavelength that is entirely different from the visible spectrum of light.

This means it will not bother you when used as an insect repellent because your eyes are only sensitive to wavelengths in the 400-700 nanometers range.

Another method to repel bugs

1. Some people find that using a bug zapper is an effective method as they are attracted to the ultraviolet light and get electrocuted.

2. Other methods include ensuring there are no puddles of water nearby, installing protective screens around vents or windows, and spraying with insect repellant.

3. These all work well in tandem with each other but may not be enough on their own.

4. You can also purchase a mosquito-repelling device such as citronella candles or coils that emit odor mosquitoes don’t like.

1. What bugs are attracted to led strip lights?

There are a lot of bugs attracted to led strip lights. One reason is that the strips typically emit warmth.

Like moths and flies, some insects find warmer temperatures for breeding cycles and choose to lay eggs near the light source.

It’s unlikely since TikTok led lights are relatively low in wavelength and would not emit a level of light that attracts bugs.

The lamp emits particular wavelengths, which means that it does emit more blue light than we’re used to seeing from a standard fluorescent or LED bulb.

However, according to the National Pest Management Association (NPMA) “no specific scientific research has been conducted regarding how these lamps may affect bug attraction.

Bugs are a problem, and if you’re using LEDs to light your home, then it’s possible that the insects will be drawn to them.

Insects, especially moths, are a common nuisance for homeowners who use LED lighting outdoors or indoors near windows where they might fly into the light fixtures.

Understanding why these pesky insects are attracted to your light can help you keep them away from your home and family.