Fluorescent lighting has become nearly obsolete over the last few years as LED seems to be the preferred choice in most homes and workplaces.

LEDs have more efficient and consume less energy compared with traditional fluorescent tubes. Another amazing thing about LEDs is that they last long enough to make you forget replacement.

With all these benefits of LEDs, shifting from the fluorescent tubes is a good move that can translate to more gains in the long run.

In the case of converting fluorescent tubes to LED, here are some of the things to consider:

Can You Put LED Bulbs in Fluorescent Fixtures?

It is possible to put LED bulbs in fluorescent fixtures or tubes because LED bulbs have come up with a great efficiency that is hard to ignore.

With the arrival of LED tubes, there have been replacements of fluorescent fixtures in an attempt to save the light. Some minor wiring needs to be done in order for the conversion to be complete.

However, great caution should be taken since the differences between the two bulbs might result in side effects.

For fluorescent tubes, ballast must be placed between the tube and an electricity supply. Interestingly, LED bulbs are ballast compatible thus can easily replace fluorescent bulbs by just plugging.

Retrofit Options for Converting and Upgrading Fluorescent to LED

Replacing your fluorescent tubes with the LED retrofit tubes can be cheap compared to replacing the entire fixture.

In order to convert this, some re-wiring needs to be done on the fixture to bypass the fixture’s ballast. Since ballast is responsible for 10% of the energy used in the fixture, the fixture is expected to be more efficient after the conversion.

It’s important to ensure that ballast failures are dealt with along with their symptoms such as flickering and dimness.

This is an economical way to secure an efficient and less energy-consuming LED retrofit tube from fluorescent.

Retrofit LED tubes have two models, standard and high efficiency, which are available.

2. From Fluorescent to Magnetic LED Strips

Before thinking of replacing the entire fixture, you should try replacing fluorescent tubes with magnetic LED strips to save on cost.

Both magnetic LED strips and magnetic LED drivers comply with the metal fixtures. This results in an easier way of connecting power, first to the driver than to the magnetic strips with the included cables.

Replacing a fluorescent fixture with T8/T12 LED tube is the easiest way, it doesn’t require re-wiring but needs you to only put the tubes.

Change the overall look of your home or workplace by simply replacing fluorescent fixtures with new LED tubes.

Generally, energy is saved when using the LED tube but the watts differ depending on the tube you buy.

Another important piece of information that usually differs depending on the tube that you are purchasing is lamp life and lumens.

Production of the T8 and T12 fluorescent tubes has become rare hence making them nearly unavailable.

For individuals who had previously installed these tubes but are not sure of the tube they installed and wish to replace them with LED tubes.

They simply need to take the tube out of the fixture and read the markings at the end since T8 and T12 are almost similar.

If you don’t see the makings you can check the diameter of the tubes, T8 has a diameter of 1 inch while T12 has 1.5 inches.

Knowing the fluorescent tube you have installed determines the kind of ballast to be used because T8 and T12 use electronic and magnetic ballasts respectively.

Then you can change your tubes to LED by just plugging in new LED tubes without any modifications.

LED panels are ideal for replacing fixtures in flat ceilings where they are surface-mounted and in suspended grid ceilings.

It’s good to stick to the troffer footprint when changing to a more appealing look.

LED panel lights give a good experience since they evenly disperse light without any dim spots that often show up in LED fixtures and fluorescent fixtures.

When changing a fluorescent light to LED, it’s easier to consider replacing your fluorescent fixture with an LED fixture.

When you have an all-in-one design, the LED has a sleek and slimmer profile that can be mounted on surfaces or suspended by wires.

Some all-in-one designs, like the integrated tube lights, are almost the same size as fluorescent tubes. The all-in-one design offers good features such as protection from water and dust since they are mostly suspended.

Once you have installed these designs, you should not get worried about the next installation since they have a long lamp life.

Below are some of the information you need to know before or during converting fluorescent to led: 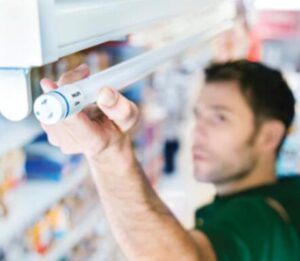 For you to be in a position of converting fluorescent to LED, you may need to install a ballast-bypass.

This requires you to do away with the original fluorescent ballast, hence the need for more sockets and labor force.

LED retrofit kit may be necessary when you don’t want to completely change the fixture but want to freshen the look.

Wires play a crucial role in ensuring that you have your LED lighting without replacing the entire fixture.

It’s good to let your technician handle the conversion or replacement if you don’t have the know-how.

Many bypass ballast led models are available in the market at different prices but the most recommended is the Sunco Lighting which is super easy to get it installed.

Changing fluorescent light into LED has been made easier and more affordable compared to replacing the whole lighting fixture.

There are several ways of changing fluorescent light into the LED, but the simplest is the use of a retrofit kit. These kits are important because they are attached to the lighting fixture for the LED bulbs to be housed.

However, a problem often arises when converting fluorescent lighting into LED because LED bulbs use non-shunted sockets while fluorescent use both non-shunted and shunted.

Another appropriate way to change fluorescent light to LED is via a ballast bypass conversion. This means the whole lighting fixture needs to be rewired in order to bypass the ballast.

Once you have a ballast in your fluorescent lighting fixture it is an advantage because conversion to LED is simple. Two different types of ballast bypass exist; one-end and two-end tubes.

The two may give you a rough time while converting the lighting.

Replacing the whole fixture is another option for changing to LED lights. Although it is an expensive way, it has some positive results like new modern, slimmer, and durable light fixtures are installed.

A simpler way of replacing the whole fixture is to use magnetic mount kits or LED panels.

Definitely, new LED lighting is beneficial in both its lamp life and energy consumption despite being expensive.

Plug and play simply mean that once power is switched off, the fluorescent bulb goes off as the LED bulb takes its place, and once power is restored, the LED lamp lights.

A good plug-and-play LED tube is of type A since it is compatible with the ballast of a fluorescent fixture. 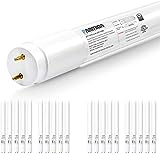 Ballast bypass is in the type B LED tube which is capable of installing directly on T8 fluorescent light fixtures.

In a case where you still have your fluorescent light fixture and want to change, here is the approach to follow.

One, you need a qualified electrician to assist you in retrofitting fluorescent tubes to LED especially where there is rewiring (ballast bypass lamps).

Since there is no specific or standard configuration in wiring, companies have come up with some good approaches that an installer must follow.

In terms of LED lamps, either shunted or non-shunted lamp holders will be specified by the lamp manufacturer and included in the retrofit kit.

External drivers are crucial to individuals with older fluorescent ballasts and are interested in maximizing efficiency without installing type B retrofits.

These drivers can be integrated with robust dimming and control functionality hence help in reducing labor and other installation costs.

Type C LED, which often comes with external drivers depending on the manufacturer, tubes are eligible for unique rebate opportunities. Using this option is expensive since it requires you to acquire these products.

How to Convert 4ft Fluorescent Light to LED?

The following are some of the steps that can help you change your 4ft fluorescent to LED.

Retrofit kits cost differently depending on which fluorescent tube you are replacing, some cost over 100 dollars while some cost less.

In short, it is good to upgrade to new changes because they have major benefits to look at. Old fluorescent fixtures are high power consuming and don’t give a great look, but this can be changed depending on your budget.

Buying new LED tubes seems more expensive than converting the current fluorescent tubes to have excellent illumination and save your energy cost.

In case you are confused about which way to take, LED is the way that will solve all your light issues.